Put the chopped chicken in a saucepan, add water and boil. Cook over medium heat for about 20 minutes. Remove the scum from the broth during cooking.

Remove the boiled chicken from the water, filter and clean the broth. Prepare the sauce. Mix the sauce ingredients in a small bowl and set aside.

Put 2 tablespoons of butter in the saj and melt over medium heat. Deep-fry the chopped potatoes on each side for about 3 minutes. Collect the deep-fried potatoes on a plate.

Fry peppers in the saj, and add oil if necessary. Put the fried peppers on a plate. Cook mushrooms for about a minute and collect them in a bowl.

Fry eggplants in a pan one by one. Add as much oil as needed. Put the fried eggplants on a plate.

If the oil in the saj is burnt, remove it and add a new one. Put the chicken in the saj and fry it a little on both sides.

Pour a little sauce on the fried chicken from the saj edges. By turning once, cook the chicken until the sauce thickens and the oil evaporates. Spread the tomatoes around the chicken, cook for a few minutes, until it softens in the saj.

Place the pre-cooked vegetables - eggplants, potatoes, mushrooms, peppers - around the chicken as a garnish. Cover the saj surface and heat slightly in the oven.

Serve the dish with bread. If you don't have a saj, you can cook vegetables and chicken in a large pan using the same rule. 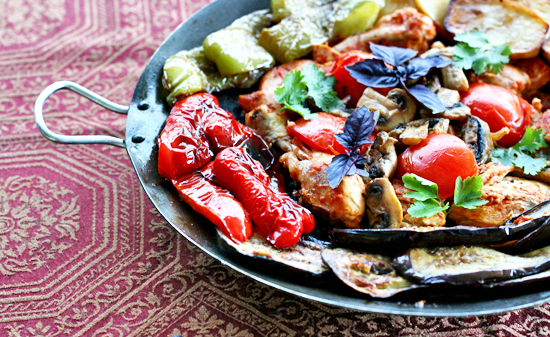