To be honest, in order for this chicken to be worthy to be called "dasharasi", it would have to be cooked traditionally, between two river stones. I cooked it in a modern kitchen. So, in the modern kitchen, two stones are replaced by a frying pan and a chicken on which some weight is put. Thus, “dasharasi” chicken becomes tabaka. It is said that chicken tabaka is a traditional Georgian dish. This word comes from the Georgian word "tafa", which in Azerbaijani means "tava" - frying pan. As far as I know, in Georgia tabaka is served with sour sauce. And we have the tabaka cooked in Azerbaijan-style. Bon Appétit!

1 chicken (about 1 or 1.5 kilograms)
3 tablespoons of butter

Wash and dry the chicken. Cut off its tail. Place the chicken on a kitchen board with the breast on top. Using a sharp knife or kitchen scissors, cut out the middle of the breast so that it divides into two parts, but does not separate from the carcass. Turn the chicken over to the other side and press down on it a little. 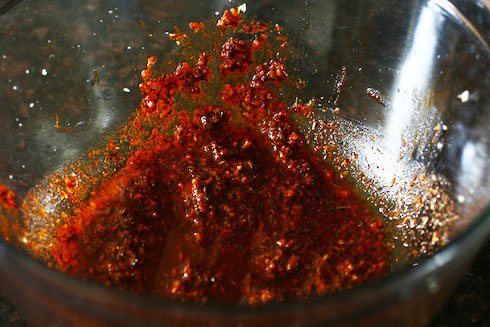 Mix the marinade ingredients thoroughly in a bowl. Dip the chicken on each side in the marinade. Place the chicken in a flat bowl, cover it and refrigerate to marinate for at least 3 hours. The more chicken is marinated, the tastier it will be when grilled. The chicken can also be marinated overnight. 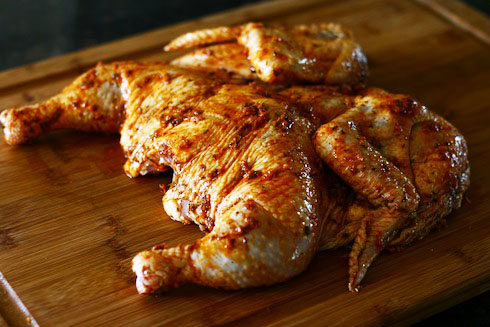 Heat 3 tablespoons of oil in a thick skillet. Place the chicken in the skillet with the breast on top. Then place a weight on top to keep the chicken flat. I usually put a flat plate upside down on top of the chicken, and on top of it, I put a small pot filled with water.

Bake one side of the chicken over medium heat for about 15 minutes or until golden brown. Then flip it over and fry it. Sprinkle greens and pomegranate seeds over the finished chicken before serving. Bon Appetit!